Gateshead conference centre to be sponsored by technology giant Sage 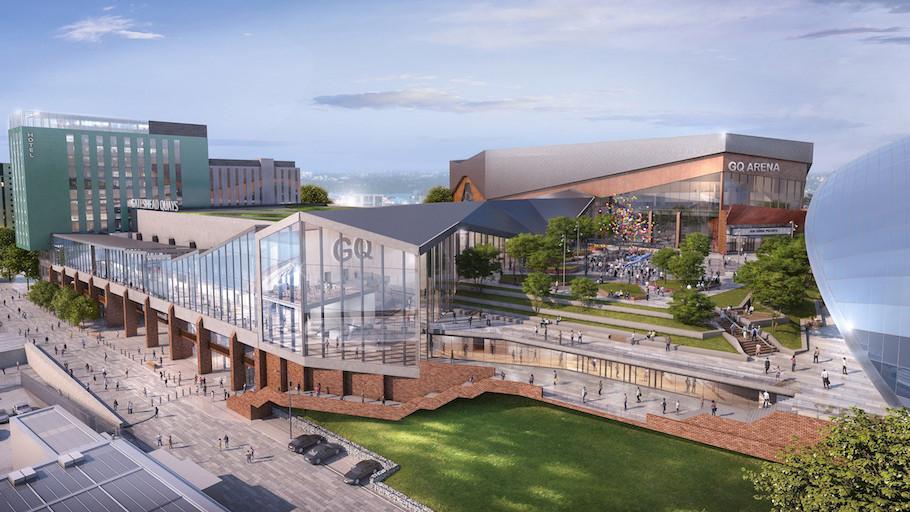 Gateshead conference centre to be sponsored by technology giant Sage

A new conference centre and arena being built on the Gateshead Quayside will be sponsored by North Esat technology firm Sage after it signed a multimillion-pound naming rights deal.

The Tyneside company, which has sponsored the Sage Gateshead since its opening in 2004, has agreed a £10m deal to name the new centre currently being built on a site between the music centre and the Baltic art gallery.

It’s hoped the new centre will create 2,000 new jobs and provide a £70m annual boost to the local economy.

Sage, which champions the small business sector that make up many of its clients, has linked its sponsorship to a number of benefits for SMEs, including work in the construction process for North East firms and access to future conferences for small companies.

The naming rights deal will see the entire development on the Gateshead Quays called The Sage. It is likely that the Sage Gateshead will be re-named when the conference centre opens in 2024 to differentiate it from the new facility.

Sage Group CEO Steve Hare said the development of the conference centre was “awesome news” for the North East and his company could not resist the opportunity to back the project.

He said: “Sage’s heart has always been in the North East, and today’s announcement embodies our purpose – to knock down barriers so everyone can thrive. The Sage brings the world to the North East’s front door, providing a platform to celebrate the region’s brilliance.

“We are committed to making sure that The Sage is an inclusive venue by giving access to all, no matter their background. We believe it will unlock the huge potential the North East has, attracting greater investment and innovation.”

The conference centre is a long-term ambition for Gateshead, with the £300m project completing the work done at the start of the century to create the Sage Gateshead music centre and the Baltic art gallery on the Gateshead quays.

It’s hoped the centre can attract larger conferences to the North East than it can currently host, with that sort of event bringing thousands of delegates to see the region and spend money with local businesses.

As well as an arena and conference centre that will replace the current Utilita Arena in Newcastle, the development will include two hotels, bars, restaurants, and other public spaces.

Funding towards the project has come from the North East LEP and the Government’s Getting Building Fund, with investment group Patrizia providing most of the initial finance.

The development is just across the river from the place where Sage first took shape 40 years ago, with the founders meeting in the former Egypt Cottage pub in Newcastle and choosing the company’s name from a poster on the pub’s wall.

The company - which recently moved to new offices at the Cobalt business park in North Tyneside - is one of the largest private sector employers in the North East and one of the UK’s biggest technology companies.

Business Secretary Kwasi Kwarteng said Sage’s investment in the conference centre was “levelling up in action” while Gateshead Council leader Martin Gannon said the new centre would “attract millions more visitors to the North East”. He said the council was “delighted to have Sage, a home grown, global business join the project as our naming partner.”

what is news technology conference